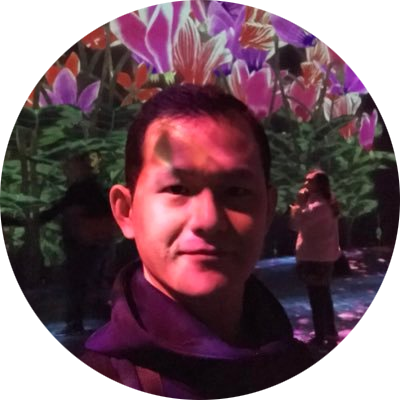 In the middle of the cottage, there is a restaurant serving Western and Indonesian food. One thing unique about the restaurant that I had not seen elsewhere is that you just order the food during your stay and they will only bill you when you check out — a convenient way for longer staying guests.

To the left are rooms and a garden with long benches, a gazebo and a wooden jump board protruding to the lake. A few trees surround the gazebo with a small fish pond on the side. A totem pole around the height of an adult stands in front of the pond.

The photo above was taken on the first day I arrived. It was a windy afternoon and the sun can hardly be seen. A boat had just arrived to alight guests before heading back to opposite shore.

I stayed two nights in this cottage. On the first day, as I arrived late in the afternoon I swam and immersed myself around the lake until it was dark.

Next morning, I rented a motorbike and toured around the northern coastline of Samosir Island which is about 50 kilometres long.

I made a few stops along the way. First to the museum — it was noon when I reached there. The museum was open but I hardly saw other visitors. Ancient tools, weapons and boat used by the Batak in the past were displayed in one section of the museum. In another section, granaries, tombs and a dancing ground with a two meters high totem pole.

After the museum, I rode to Pangururan and it took me 2 hours to reach. A few hot springs lined up along the route between the museum and the bridge just outside Samosir Island. I stopped at the narrow canal that separated the island from the mainland for a while before completing the tour and rode back to the cottage.

Here are some of my Lake Toba pictures on Flickr.